Jesse Blank Rundle calls the track “Nomad Exquisite” an “explorer’s song.” Be that as it may, Rundle’s ability to channel the essence and spirit of Florida’s everglades is a magical thing. His beautiful tribute is a mesmerizing tune that sends ripples of polished acoustic guitar riffs and his stoic vocals reach beyond the rings. “Nomad Exquisite” is indeed exquisite. 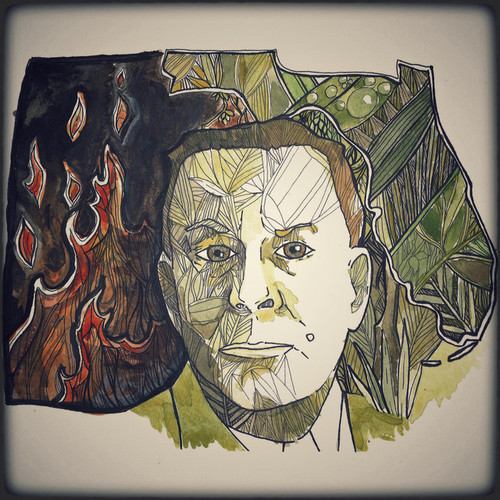 Rundle’s song never falls trap to a new-age, instrumental nature song. His song focuses on the imagining of the humidity, the richness in greens and life abundant in the “river of grass.” Fans of The Shins and Neil Young will find solace in Rundle’s prose and enchanting voice. He stays within his range; the sweetness in his cadence is like a cedar. His opening “oh-oh-oh” brushed up again a plunking, acoustic guitar sets the mood for a stirring journey. The way the word “beholding” and “lightning colors” cascade from his mouth, so does the higher, more melodic measures come from the acoustic guitar. A slight percussion breaths below, stirring the overall music bed. Ever so slightly, there’s a trombone burping in the background. It feels almost wrong to say the word “burping” when listening and describing such a capturing song, but the baritone sound is much like the alligators and whatever of the many inhabitants of the everglades are making their presence known. The symphony of sounds that the everglades make is exquisite in its own way. All–together, the brightness and changeups remind me of the sun hitting morning dew or raindrops drying up from the sun’s rays.

This song makes me feel like new possibilities are on the horizon. I feel hope. Rundle repeats “As the immense dew of Florida” and as a listener, I felt like the saturation, the water, represented a feeling of awash. A new start. This song also makes me feel lonely. Not in a depressing sense, but the way that the world is so big and we are but just small, tiny dots. Rundle’s laid-back style is inviting and feels like a caressing story. It’s beautiful.

Rundle, who lives in Idaho, is not the songwriter – he’s merely the instrument. The lyrics to “Nomad Exquisite” are adapted from the poetry of Wallace Stevens’ Harmonium. The track is from the forthcoming album, Radishes and Flowers, due February 2020. Stevens won the Pulitzer Prize for Poetry in 1955 – long after his collection, Harmonium, was published. Interesting, too, is Stevens made many trips to his beloved Key West during his lifetime. He would have had to drive through the everglades and “alligator alley” to reach his destination. I think I know why Rundle absorbs the artistry of Stevens; the poet is universally loved. He’s simplistic without being rudimentary. Perhaps this is the most appealing part of “Nomad Exquisite” put to song, too. Rundle’s ode to nature, urges the listener to explore all the sounds and breathtaking magic nature has to offer. One just has to close their eyes and listen to the “int-between” to find the stirring, and flavor-rich sounds.