With the release of Bella Union debut LP Vanishing Lands less than a month away on November 15th, Dog In The Snow today share new track “Roses” alongside its accompanying video. The video is again directed by Jay Bartlett, with whom Helen Ganya Brown, aka Dog In The Snow, collaborated on the videos for both “Dark” and “Dual Terror”. 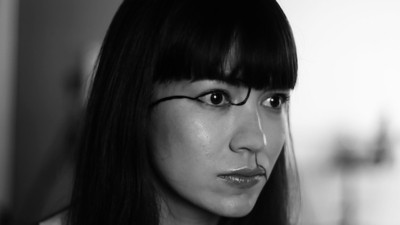 Of the video Bartlett says: “Keeping with the themes running through the triptych of music videos for Dog In The Snow we decided to shoot a one take video for Roses. Starting close and claustrophobic, the frame would open out slowly to reveal a harsh landscape that the artist is now a part of. Some sort of closure for the visuals. Shooting this was quite hellish. We were exposed to all the elements that day, but mainly wind and rain, and I think we only managed to a few takes before we were happy to wrap. Blue hands and numbness was the order of the day, however looking back over the footage, the weather totally aided the video’s look.” Helen Ganya Brown adds: “Roses is the first song I wrote with all the themes of Vanishing Lands in mind. ‘Some Survive, Thousands Die’ is a photograph by Alva White which spurred on the narrative of the song – a journey into an unknown land. It’s a song for those who take the risk every day in search of something better.”