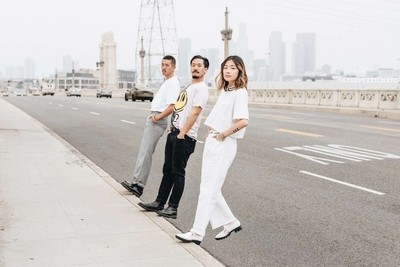 Alex Hwang (guitar/vocals), Daniel Chae (guitars/vocals), and Sally Kang (keys/vocals) have come into their own as a 3-piece, forging a complementary axis from which to write, record, and play. Taking a fresh feeling-driven mentality into their recording sessions and coming out with five songs that fit its epic scope with similar vibes and feel. “Monsters” is a supremely catchy banger co-written with the husband-and-wife pop duo Vinyl Pinups that is propelled by a frenetic energy and anthemic chorus. “OKAY COOL” is a fun, poppy jam that stems from a Michael Jackson-inspired beat created by Chae, and “I’m Amazing,” co-written with POP ETC’s Chu, maintains the EP’s level of bravado, confidence, and exuberant enthusiasm. The closing piano ballad “Let Me Down” was co-written with producer Derek Fuhrmann (Andrew McMahon, KYGO, O.A.R.) and ends the record on a sentimental yet sweet note. Vol. 2 is produced by engineer Miro Mackie, who worked as the drum tech on the band’s previous full-length, Drinking from a Salt Pond. With Miro’s assist, the beat-driven sound of the EP and its attention to sonic details serves as an extension of the joyful, feeling-based songwriting.