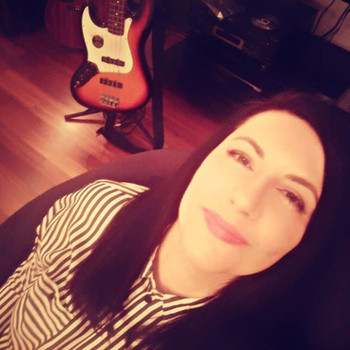 A lone drumbeat awakens a sleepy acoustic guitar with a soft rhythm that will slowly but surely evolve into an intoxicating groove in “So Far Away,” the new single from Croatia’s Jas Frank & the Intoits. Amid the fragile beats, Frank starts to sing with a restrained passion that begs for us to listen closely as she sensuously spins a yarn that is rife with rebellion. The guitars confidently dance around her words with a swagger that is difficult to ignore, and though the lyrics are delivered to us with a lighthearted swing, the depth of emotion attached to their narrative is far from spindly. This is Jas Frank & the Intoits at their most personal, and it’s no overstatement to call it their best sound yet.

There’s nothing overtly experimental about the construction of “So Far Away,” and still it sounds so much more unique than the other blushing balladry included on The Girl from Cherry Valley. We get rolling on the back of an even-keeled groove that grows into a gargantuan force to be reckoned with by the chorus, and even though the tempo never shifts from one verse to the next, it’s almost as if we’re riding on a rollercoaster of rhythm that is twisting us every which way but loose before returning to a steady pace under the direction of Frank’s patient lyricism. None of the thrills and chills come from an erraticism in the flow of the song, but instead from the way that Frank inserts her words into the strutting instrumentation.

The hook in this chorus is so charming that repeat listens are almost a given, which is where the lyric video for the song comes into play. The video, which features nothing more than the words and some gorgeous illustrations of both the band and their incredibly diverse fan base, is a rare example of a minimalist theme being manipulated through melody into a concept that is anything but understated in nature. The shots are surreal, the structure very simple, and as entrancing as the visuals are, the music is the most hypnotic element in the entire piece. I’ve always been a snob when it comes to this type of material, and urbane content like “So Far Away” makes it all the harder for Jas Frank & the Intoits’ peers to affect me as much as this group does.

After a refrain that features Frank and the drums locked in a duel for our hearts, “So Far Away” drifts into darkness in an extended cycling of its chorus. The music stops and we’re left alone with our thoughts and the echoing vocal that has scattered into the atmosphere, and while I really enjoyed the song the first time that I listened to it alongside the other tracks on The Girl from Cherry Valley, I think that I’ve grown to appreciate it all the more since absorbing the lyric video that the band has just released to promote it as a single. Jas Frank & the Intoits hit it out of the park with this song, and definitely aren’t as far away from making it big as many of their fellow alternative rockers are at the moment.