A wandering soul searches a desolate urban environment, haggard and homeless, adrift in an American landscape that has become all too difficult for the masses to survive in. In the background, David Gelman belts out a homespun harmony alongside some striking acoustic guitar play and a fleeting fiddle melody, and we’re instantly enveloped by the mammoth tonality of the instruments cushioning his croon. This is the video for “Far Away,” which is the first song on Gelman’s new record Last Surviving Son, and though it’s structured as simply as its parent album is, it’s dripping with more poetic substance than I could have ever anticipated to find in the four minutes and change that it lasts. Last Surviving Son is a juggernaut of an LP, and it’s making a big splash this spring for sure. 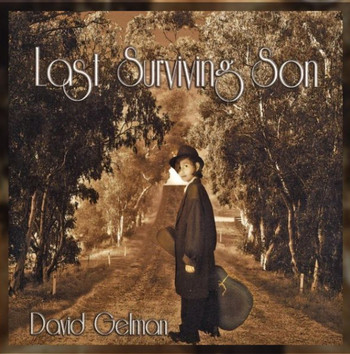 The first half of the record puts the instrumental charisma of Gelman and his fellow players at the forefront of the mix, with the songs “Set It Free,” “Lonely Tonight” and “The Roads We Didn’t Take” standing out as its biggest stars. “Feel Alright,” “In the Sun” and the title track go down a slightly more eccentric path than the other songs do, but they all share a common melodicism that makes them blend together as well as peanut butter and jelly do. “Lonely Tonight” is the swinging centerpiece of Last Surviving Son, and if it were electrified in a live setting, I can imagine it taking on the shape of a stadium-rocking country jam.

“Let It All Go” pulls the trigger on Act II in this LP, and its blustery melody can’t help but remind us of a young James Taylor. Gelman wears his blues influences with a lot of pride in “Because You Love Me” and follows up on the track with a pendulous ballad in “Soft Surrender” that stings hard but leaves us itching to play the song all over again once it comes to a stop. “Wasting Away” follows a similar formula, but in the concluding tracks “My Vows to You (Wedding Song)” and “Presence of the Lord,” Gelman takes a second to acknowledge his deep roots in Americana without drawing from the same well as his contemporaries in alt-country have been lately. The compositions are acerbic and centered on the lyrics above all else, but there’s never a moment where the musicality falls short of the bar that the verses set for it to match.

Listening to Last Surviving Son makes me want to see David Gelman live and in person at some point in the near future, as all of this material has a flexible construction that would make it excellent fodder for the stage. If even a small portion of the presence that he’s got in this record were to translate to his live show, then it would be an event that I wouldn’t want to miss out on. Gelman sets himself apart from a crowded talent pool in the country underground on this album, and for my money, there really isn’t another singer/songwriter out there quite like him.