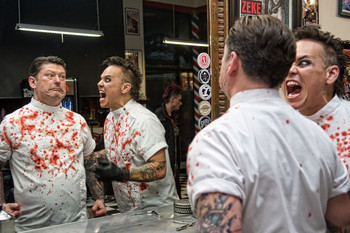 In this life, you’ve got to keep your eyes peeled for red flags. A lawyer wearing an ankle bracelet. A one-eyed welder. Or, in this case, a pair of barbers rocking gore-soaked barber whites in public. It doesn’t take a trained eye to see that these folks could all use some help. At least The Cutthroat Brothers are seeking the healing power of a “Psykik Chemist,” who, we’re guessing from the lyrics, is a graduate of Behind-the-dumpster Doctor College.

But that Doc is going to need it. Over a scuzz-and-fuzz guitar-and-drums attack, The Cutthroat Brothers paint a dark portrait of a man in need of a drug – any drug – that’ll keep him from going even further off the deep end. Their primal, bluesy riffs have a slaughterhouse reek and sound a bit like The Cramps and The Gun Club did hard time together. If you think you hear some of Mudhoney’s unhinged sludge too, well there’s a good reason for that. These guys were onstage for it all during Seattle’s Grunge heyday, with Paycheck handling drumming for hardcore punk stalwarts Zeke, so it only made sense to reach out to Jack Endino to man the boards on this one. The legendary producer spit-polished Mudhoney’s scene-defining “Touch Me I’m Sick,” Nirvana’s genre-exploding Bleach, albums from Soundgarden and Skeletonwitch, and many, many more.

For the second single off their self-titled debut, the two real-life barbers, Jason Cutthroat and Donny Paycheck, take the stage fresh off a couple of seriously botched clip-jobs. Joining them under the lights are the shimmying, inked-up, fish-netted, butt-slapping badass girl gang, The Creeps, who look like they got ejected from a Rollerderby match. Directed by Jack Saffle, the “Psykik Chemist” video serves up some kaleidoscopic, vertigo-inducing live shots of the garage punkers laying it down for a crowd of beer-hammered good-for-nothings. To look into Jason Cutthroat’s possessed, electrified eyes here is to catch whatever brain-rotting mental malady they’ve both got.