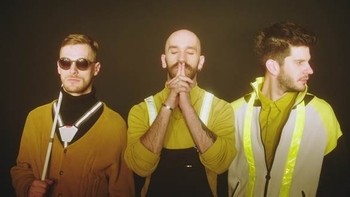 KIDinaKORNER/Interscope rock band X Ambassadors’ latest single “BOOM” was co-written by the band and produced by Ricky Reed (Twenty One Pilots, Leon Bridges). Visceral and instinctive, “BOOM” is a quick-fire anthem for emphatic recovery and personal revolutions. As its beat rocks, personal demons and toxic relationships recede in the rearview mirror. The artwork for “BOOM” is written in Braille and designed in a yellow-on-black colorway.

For Casey Harris, the band’s keyboardist and Sam Harris’ brother, who was born blind, it is the first physical manifestation of his work that he has been able to experience visually. He has just 10% of his vision. “BOOM” will be featured on the band’s forthcoming album, the follow up to their debut platinum selling album VHS, later this year.