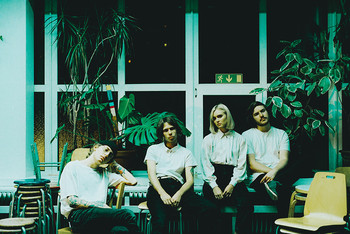 Beverly Kills are creating an impressive name for themselves as one of Gothenburg’s up and coming bands to watch. Last year saw the band release ‘Fourteen’, ‘Melodrama’ and ‘Dreamless’, gathered great acclaim from both local and international press including being mentioned as one of the “Best Swedish Indie Debuts 2018″ by HYMN and being nominated for the” Breakthrough of the Year” in the Gaffa Awards. This also saw the band playing Gothenburg music showcase festival Viva Sounds and a side show at this years by:Larm Festival along with shows supporting Agent blå, Moaning (USA- Sub-pop) and Västerbron later this March. The release of Beverly Kills brand new single ‘Revellers’comes with the announcement of their debut physical release ‘In This Dim Light/Melodrama’ limited edition 7″ vinylthrough Australian Indie label Hell Beach.

‘Revellers’ encapsulates the very essence of Beverly Kills, emotionally charged and full of energy, as they seemingly blend driving, raw and catchy sonic landscapes with dark and complex lyrical content. The energy of the song is set by a punchy and aggressive rhythm section laid down by Viggo Mattson and Hampus Höggren, which is perfectly matched by John Jonsén tight rhythm guitar playing. Dreamy synths and atmospheric guitar tones act as points of relief throughout the song as Alma Westerlund’s vocals float effortlessly throughout the track delivering catchy vocal melodies and most importantly the lyrical content. The idea behind the lyrics came out of a spiraling, weird thought that John had after reading about the increasing numbers of the ‘Bystander Effect’ in Sweden. This got Johnthinking about a potential world where we’ve killed off everything and everyone just to satisfy our need to see deathand chaos, “until there’s nothing left to kill but ourselves”. ‘Revellers’ clearly demonstrates Beverly Kills song writing prowess and further establishes their emergence in the ever-exciting Gothenburg indie scene.