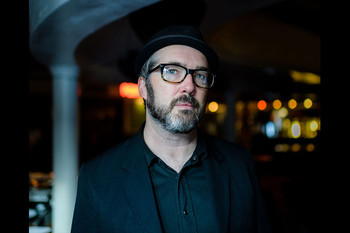 So what would you do if there wasn’t any tomorrow? Would you ride naked through the streets of the town on a scooter? Or would you round up some friends, head to the local bar, and live it up as loudly and as boldly as you could? The world may or may not be ending for the characters in the video for “Damn The Consequences,” the latest single from Oregon folk-rocker Sam Densmore – but they’re sure acting like they’re at their final party. Shown on giant karaoke screens, Densmore eggs them on in song, encouraging them to imbibe and disregard any warnings their bodies are sending them.

As always with Sam Densmore, the message is more ambiguous than it first seems. Yes, “Damn The Consequences” – the first single from his forthcoming EP Black Velvet Unicorn – is a terrific party number: it’s upbeat, bright, and confidently sung, and a departure from the more reflective material on his 2017 debut full-length Open Marriage. As much as Densmore’s narrator craves the escape of “sweet intoxication,” it’s pretty clear that he realizes that tomorrow – and a heck of a hangover – is coming. That’s Sam Densmore: willful enough to throw caution to the wind, but wise enough to expect some self-inflicted wounds.

That broad perspective has made Densmore one of the most acclaimed new voices working in a city and a state renowned for its offbeat, adventurous songwriters. Open Marriage – which addressed the deterioration of Densmore’s relationship in harsh, frank, and frequently funny language – was met with ecstatic reviews in Portland and beyond. After touring Europe solo in 2017, he came home, wrote all new songs, and revamped his sound and his band. His new band features new players and a more electric, high-energy pop-rock vibe. With Black Velvet Unicorn, Sam Densmore is ready to share this new energy with the world.