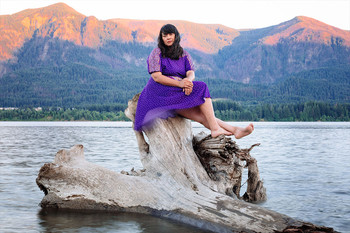 “Having this identity—radical indigenous queer feminist—keeps me going. My music and my identity come from the same foundation of being a Native woman.” Katherine Paul (aka KP) is Black Belt Eagle Scout, and Mother of My Children is her debut album. Recorded in the middle of winter near her hometown in Northwest Washington, Paul’s connection to the landscape’s eerie beauty are palpable throughout as the album traces the full spectrum of confronting buried feelings and the loss of what life was supposed to look like. Paul reflects, “I wrote this album in the fall of 2016 after two pretty big losses in my life. My mentor, Geneviève Castrée, had just died from pancreatic cancer and the relationship I had with the first woman I loved had drastically lessened and changed.” Heavy and heartbroken, Paul found respite from the weight of such loss in the creation of these songs that “are about grief and love for people, but also about being a native person in what is the United States today.”

Paul grew up in a small Indian reservation, the Swinomish Indian Tribal Community, surrounded by family focused on native drumming, singing, and arts. From an early age, Paul was singing and dancing at powwows with one of her strongest memories at her family’s own powwow, called the All My Relations Powwow. With the support of her family and a handful of bootleg Hole and Nirvana VHS tapes, Paul taught herself how to play guitar and drums as a teenager. In 2007, she moved to Portland, Oregon to attend college and get involved with the Rock’n’Roll Camp for Girls eventually diving deep into the city’s music scene playing guitar and drums in bands while evolving her artistry into what would later become Black Belt Eagle Scout.