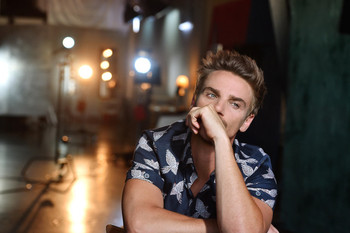 Riley Smith’s vocals and songwriting stunningly blend country pop, hard-hitting soulful Americana and modern production for a sound rarely found in music today. No secret to those familiar with his lead role on the popular TV show “Nashville”, Smith’s gritty yet smooth, singing voice and charismatic presence have built him a career on both stage and screen. Acting in popular shows like “True Blood”, “True Detective”, “Frequency” and “Life Sentence”, catapulted Smith to the forefront of the industry and his love for music introduced him to audiences in a way unlike any other role he has played.

After moving to Nashville, Smith dove into the realm of old classic country music, exploring it’s history and roots. However, the longer he was there and the more musicians he collaborated with, his sound started developing into something more dynamic and divergent. Smith’s writing process began to reference a wider variety of sounds and styles resulting in a body of music that’s relatable, heartfelt and diverse. “It’s what I think makes the sound unique and kinda difficult to put in a box.” Smith reveals.

Smith’s latest releases all stem from a collection of notes he keeps on his phone. Thoughts and recollections of his journey through life, what he is going through, the way he feels and the things he witnesses. He reveals, “The stories are really a reflection of my life right now. I’ve been alone and on the road a lot, missing someone so it’s bitter sweet and that comes through in the songs and lyrics”. Produced by Kevin Leach and mastered by Grammy Award-winning Nathan Dantzler, the music emits Smith’s desire of creating smooth and warm sonic soundscapes that make you feel good.