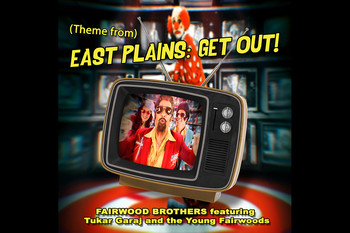 Are you ready for this one? You may want to put your seatbelt on for this: the Fairwood Brothers have created an entire world and pointed cameras at it. You think you know weird? You don’t, and you never did. But before you hit their twisted hometown of East Plains, we strongly suggest you dip a toe into their home-brewed hallucinogenic universe by taking a gander at their latest music video for “(Theme From) East Plains: Get Out!”. In fact, we insist, for your own safety.

The video is just a taste of the colossal mind-trip that the Fairwood Brothers have been able to construct without collapsing into insanity… yet. Their forthcoming movie, East Plains: Get Out!, is due for release this coming summer, and a television show is in the works for later this year. The Brothers aren’t slowing down anytime soon.

“(Theme From) East Plains: Get Out!” is a musical collaboration of the Fairwood Brothers, Tukar Garaj and The Young Fairwoods. They have put together the most mind-bending and thoroughly enjoyable visual you’ve seen over the past several months (or perhaps ever), and here at HIP we are proud to be championing it. It’s hip-hop, it’s rock, and flies in the face of all things normal and ordinary. It’s Beck meets Flight Of The Conchords, with a down-home spin. Which part of their mad science is the most brilliant? They worry us, and we love them for it. Only total dedication and a warped vision could result in this spectacle of Technicolor eye candy.

The Fairwood Brothers are a duo like no other, but who are they exactly? Older brother Rusty is right-handed but plays guitar left-handed, and bass guitar right-handed. He’s 5’10” with multi-colored hair and green eyes. His favorite color is anything except plaid. His favorite record is Strawberry Fields Forever. Clark Fairwood is an anomaly wrapped in a riddle. When he was eleven years old, he was handed down a left-handed homemade guitar which belonged to his great-grandfather; when Great Granddaddy found out, he took it back. Clark began “sitting in” with local blues giant Smallman Luster, who gave Clark a proper right-handed ukulele; with that, Clark found his voice.