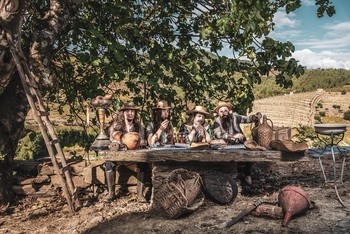 Portuguese farmers Serrabulho have just released a song from their third album “Porntugal (Portuguese Vagitarian Gastronomy)”, which will be out in December, 15th on German label Rotten Roll Rex.

The first “single” chosen is Dingleberry Ice Cream, a song with lyrcs in English and Mirandese – Portugal’s second official language, spoken mainly by elders in the band’s region – that tells the story of a Family Frost ice cream salesman (hence the truck’s typical melody being played with a bagpipe) who worked in Miranda do Douro (known as part of Portugal’s “cold lands”), who became frustrated with his lack of success. One day he decides to “tweak“ the ice cream’s recipe, and suddenly his sales go off the charts! Ricardo Santos [Velha Gaiteira, Gambuzinos, Trasga, Bizarma and Zaragaitas] plays the bagpipe on the song.