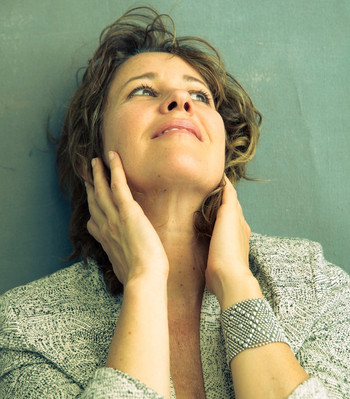 It says a lot about a composer when a song is as moving musically as it is lyrically, which is exactly the case with the majority of what Here, the new album by Rebecca Blasband, delivers unto those who pick it up. From the studded grooves of “Way of the World” to the simplistic, pastoral melody of “Ghost Song” or “Long Distance Lover,” there isn’t a moment in Blasband’s latest release that isn’t saturated with evocativeness and thought provoking subject matter. In the opening song “Love Is,” she plainly tries to describe to us what the greatest emotion in all of humanity feels and sounds like, and in my opinion she (and her trusty piano) come pretty close to doing just that. “Gotta Work It Out” encourages us to rectify our wrongs and right the course of our path before it’s too late, and its message isn’t executed through aggressive lyrics but rather through the gravity of its rhythm. She goes electric and acoustic in this album without a care in the world, but her style of attack is hardly reckless by design.

Every move she makes in Here is a calculated one, and what we discover in the bristle of “Who the Hell is Peter Brown?” and the gorgeous title track is that Rebecca Blasband hasn’t just amplified her artistry’s best qualities since 1997’s RAPT, she’s redefined her status as an indie icon for a new generation of listeners. “Walking on Water” and “Those Happy Days” are poppy and riddled with hooks, but they’re also full of melodies that are generously distributed across the even-keeled mix of the album. What’s more, their lyrical content feels genuine and heartfelt, not artificial and bland. Blasband strips away all of the filtration that would have made this album a much more conceited affair using a relaxed prose coupled with a cerebral production, and what comes as a result lives in the grey area between indie rock and outsider folk music. When we look at the arrangements it’s quite obvious that she could have done so many other establishment-friendly things with these songs, but instead she made Here into the testament to her originality that it needed to be, and not something that would merely make A&R reps and industry insiders happy.

“Fool’s Heaven” is probably my favorite track from this record, and I would actually say that it’s also the most obtusely constructed. It doesn’t mind bending back and forth between free jazz and mainstream pop/rock, but it also rejects the very notion of being ambient or droning. There isn’t a single song on Here that I would say sounds out of place amongst the rest of the content, and despite its melting pot of colorful vitality it avoids all of the hazardous pitfalls that accompany the making of a diversified alternative record by adhering to the parameters of classic folk music. She wears her heart on her sleeve with this album, and in an ironic twist of fate ends up capturing ours somewhere between the muted melody of “Love Is” and the lingering pleas of “Long Distance Love Affair.”