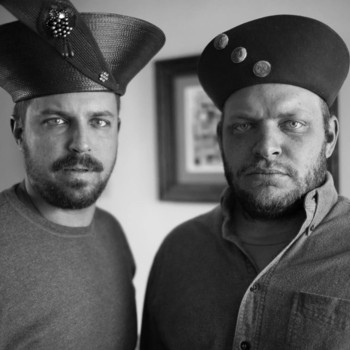 Alternative rockers, Univore bend time and sound in the addictive 12-track album, Conch. Univore is Nicholas Flando and Sagan Jacobson. The two are joined with some guest players on various tracks, but it’s safe to say Flando and Bachmann create the core Univore sound. Pinning down that sound is a challenge – in a good way. It’s at times the ambient sounds from 80s soundtracks, to modern technological twists and turns. Still, their sound is very human and elicits strong emotional connections.

Those emotions – from comfort, serenity and island-like freedom – strike in the most curious moments.  The arrangements of music beds and even the track list order had me on the edge of my seat.

The first track, “Meet Me at the Petroglyphs” is an instrumental tune that really sets the stage. I think by choosing this as the opening song, it really played to the listener’s advantage. It’s a soothing song, with slightly mysterious, Egyptian or Middle Eastern tones. Just whispers of those influences come through in the just over three-minute track.  The dissolved sounds leak into memory, and followed me throughout the day. At one point, too, I felt like the music bed could be a distant relative to The Police’s “Wrapped Around Your Finger.”

“Fun In the Sun” is a track that really shakes the trees. At first it may feel like an unnerving ping – a throbbing tone that repeatedly resonates itself around Jacobson’s vocals. The chorus is just too good to ignore and it tattoos itself to your ears. “Real Magic,” the album’s third track seemed to have more complexities and brighter piano and synthesizers. The beats really bent and created a groove.

Besides “Fun In The Sun” the other standout song for me has to be “Geometrically Speaking.” It felt very austere, but jazzy and funky at the same time. Dare I say it, a bit of Orchestral Maneuvers in the Dark-esque? The guitar work on this track (it’s track 11) showcases itself against this vibrating, echoing repetition. The beat is there and the song may end abruptly, but it’s a solid groove from the first moment. It surprised me that I liked this one so much, and don’t get me wrong, tracks like “That Night We Drank The Volcano” and “Miracles” are certainly no stuttering sound waves, “Geometrically Speaking” fosters that Caribbean vibe meshed with funky modern movement.

The title track – and last track for that matter – continues the ambient sounds and delivers a fresh take on the island guitar riffs. I really dug this one too, but seemed to be more enthralled by “Geometrically.” Perhaps that’s just my mood!

Overall, Univore accomplish just what they boast in their biography – listen to them in the background, as a score to a movie or even the top of your Spotify playlist – they seem to create sounds that deliver emotions to your soul. Conch is a grade A effort and special accolades for combining so many genres of music and maintaining instrumentals. The musicianship shows – albeit the synthesizers do much of the work, there’s no denying the overall showmanship and craft put to good use.