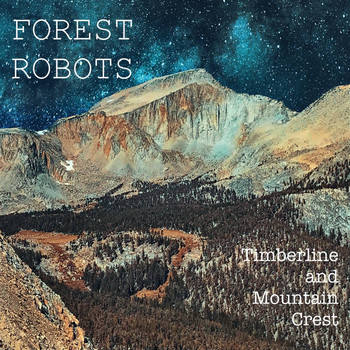 Forest Robots is an especially sci-fi-y name for a musical artist. Although Fran Dominguez (under the moniker Forest Robots) applies technologically advanced keyboard instruments to the ten tracks contained on the Timberline and Mountain Crest album, the inspiration for these instrumentals could not be more natural. In fact, it was nature – specifically the mountain range of the Sierra Nevada – that acted as the primary focus for this music.

There is another more human inspiration for these recordings as well, though. It’s Dominguez’s daughter. Dominguez calls his album a love letter to her, which extols the wonders of nature. Dominguez hopes these sounds, as well as accompanying photographs he’s taken of the region, will educate her on the big positives of being in nature, as well as working towards preserving it. It’s one thing for a man to love something; it’s quite another thing for a man to pass down his passions to his offspring. Timberline and Mountain Crest is Dominguez’s attempt to spread his love of nature down along the family line.

Wisely, these track names are written much like photograph titles. The anthemic “Farewell Sudden Summer Storm Clouds” reads like someone watching a rare summertime rain shower disappear into the atmosphere. As you might have already guessed, the majority of these ten album tracks are also arranged like complete sentences. The shortest title of all is the two-worded “Sudden Bioluminescence.” This plucky synth piece sonically describes that biochemical emission of light by living organisms, which may include things like fireflies or deep-see fishes. Dominguez’s recording – with this one, as well as all the other album tracks – expresses awe at the sight of nature.

This awe of nature is like no other kind of awe. Sure, most people are wowed by the overpoweringly bright neon lights of Las Vegas the first time they visit that famous city. However, nature’s beauty has been described as a kind of church not made with hands. For the more spiritually inclined, nature reflects the hand of God. Nature has a beauty that mankind can only approximate, but never completely replicate.

With “Through the Trees and Into Wide Open Landscapes,” one feels like he/she is on a travelogue along with Dominguez. With its insistent rhythm and swirling echoes, it’s as though one is right there, walking through a forest of tall trees and marveling at the ancient majesty of it all.

Stylistically, one can draw comparisons between Forest Robots’ music and what was once termed New Age music. New Age was a really silly term, looking back at it in retrospect, because it was also a title applied to goofy religious movements. There’s nothing at all goofy, though, about what Forest Robots create. Instead, Dominguez is quite serious and sincere with his art, and the word ‘goofy’ might well be the last term one would ever use to describe it.

Much like appreciating nature, enjoying Forest Robots is a completely subjective endeavor. You either lock in emotionally to what he’s doing, or you don’t. Also, much like nature — even if this is not your thin — there’s hardly any denying its beauty. Fran Dominguez’s Forest Robots is a loving reaction to the natural beauty around him. Think of it as a sort of impressionist painting, only created with sounds.