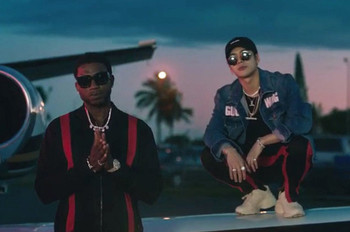 Hong Kong-born triple threat Jackson Wang is a singer, rapper, and dancer based in South Korea. Jackson Wang is a hugely influential member of the popular K-Pop group GOT7 and the first Chinese artist to win the Next Big Thing Award at the 2018 Teen Choice Awards.

Jackson who commands a massive and devoted fan base, has a following in the 10’s of millions across social media, is also the face of Fendi and Adidas in China.

The latest single from the GOT7 rapper was released on Tuesday (Nov. 6), and accompanied by a music video that showed the pair of hip-hop artists living it up, taking Wang from Shanghai to Hawaii while singing and rapping about having a “Different Game” with his crew and Mane.

“Rich in My ambition/ Balling we go all in/ Call me China Man/ Team Wang made it Jackson Brand/ Why you faking reputation buying profiles then,” raps Wang, in a reference to Team Wang, the China-oriented team that focuses on his career as a soloist, and an apparent allusion to others buying followers on social media.

Unlike many of Wang’s solo tracks, “Different Game” is performed entirely in English.

Gucci Mane, who recently announced the December release date for his upcoming album Evil Genius, features with a verse in which he hypes up Wang while addressing those who aren’t yet on his level. “Balling like Lamar/Jackson a dual threat,” he says. “You just a freshman you still ain’t in the league yet.”

One-seventh of the K-pop boy band GOT7, Hong Kong-born Wang simultaneously pursues a career in the Chinese market along with his activities in the South Korean music scene. “Different Game” is his latest single as a soloist in 2018, following the release of other songs including “Dawn of Us,” “Bruce Lee” with Al Rocco,” and “Fendiman.” Along with his work as a member of GOT7, he’s also been busy on several other collaborations this year in China. He regularly appears on the China V chart, and his song “Fendiman” debuted in the top 10 of the Rap Digital Song Sales chart earlier this year, peaking at No. 8 on the chart dated June 9.