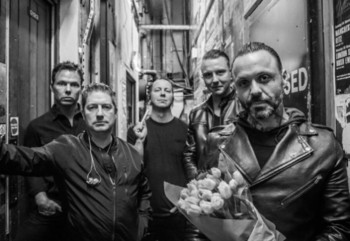 Following the release of their newest album I Hope You’re Happy (which debuted at #6 on the Current Albums Chart, #2 on the Alternative Albums, and #28 on the Billboard Top 200), platinum-selling alternative giants, BLUE OCTOBER, are releasing the video for the record’s opening track, “Daylight”.

The “Daylight” video is a mesmerizing collage of scenery and lights that compliment the song’s icy, industrial drums and synthesizers. The band’s animated performance in the video stresses the track’s dynamic juxtaposition while laying bare the captivating personality of frontman Justin Furstenfeld.