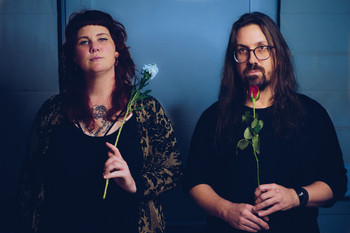 New single Billboard from New Zealand-based rock duo HEX is at times dark and at times animated, profferring an elusive celebration of dissent underlaid by threading vocals, pulsating drums, and barely-contained rage; a pro-choice rock anthem that directs its anger toward New Zealand male politicians and the contemporary zeitgeist that restricts women’s freedoms.

“With our crowbars we insist that free choice rules the womb,” sings Kiki Van Newtown, ending the song. It’s a reference to something that actually happened; Van Newtown once pulled over in her car, got a crowbar from the trunk, and violently dismantled a billboard alongside a highway that featured anti-choice images of a fetus. Now, HEX has translated that experience into a new music video, featuring the three ghostly characters arming themselves with crowbars and wrecking similar billboards.

Having recently undergone some personnel changes, HEX is quickly becoming a new band. Brimming with frustration, imagery, and verve, their music deals in subversion: a discordant, electric experience under the umbrella of sonic twilight. Epitomizing all of this, the video for Billboard is due to be released this summer.