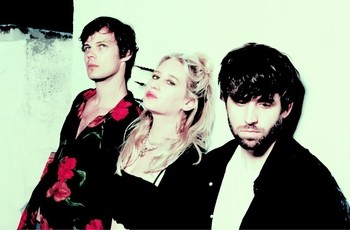 The LA trio My Ultra Violet have released their starcrossed new track ‘Wilde As Me’.

After casually swapping numbers at a gig in LA, Magic Wands member Dexy Valentine has teamed up with Coleman Moore and Phil Galloni to create elegant, moody dream-pop.

With the help of producer Adam Greenspan (Nick Cave, Supergrass, Band of Skulls) and drummer Malcolm Cross, ‘Wilde As Me’ combines the nostalgia of 80’s pop with a modern, electronic tone – a hypnotic musical daydream.

Dexy occupies the space of a two-dimensional character within the track to highlight the “internal irony” of the “lyrics in pop songs in general, how they tend to be shallower and more blatant.” It’s a nod towards one of her favourite poet Oscar Wilde’s many famous quips: “only the shallow know themselves”.

‘Wilde Like Me’ is the second single from their debut E.P ‘Wilde’ released later this year.