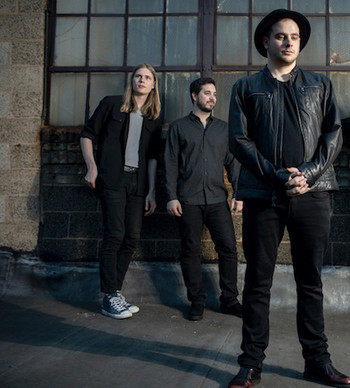 “California,” the latest single from New York indie rockers The Chordaes, starts off like a rising sun breaking through the darkness at dawn. Slowly its light begins to envelop everything in its scope, warming us in its glow and dispelling every negative shadow that tries to linger from the night before. Strings gently caress us, an atmospheric note haunts the foreground as if to supervise the instruments coming together, and a single voice suddenly penetrates our glassy surroundings. Leo Sawikin, the lead singer of The Chordaes, describes a fog that he can’t see through; an ocean where there isn’t any air to breathe, and a desire to transcend them both. We feel lost in this vast wilderness, but the band reminds us that we’re not alone in our solitude.

The layers and layers of strings start to pile up and blanket us underneath their protective surface from any mysterious entities that could approach us in our isolation. Our isolation is, however, what we’re forced to contemplate the most in “California,” as we’re both musically and lyrically reminded (constantly) that we’re not where we’re supposed to be. The Chordaes are directing us, chasing after that sunlight that covered everything around us in hopes of finding some sort of way to make it a permanent fixture of this place. For those of us who know a little bit about the band’s New York origins, the lyrical irony is deliciously reverent and self-aware.

The Chordaes might not act the part, but they’re a very virtuosic band. “California” might not contain any over the top bravado in its singing, expert level guitar solos or jazz fusion style drumming, but the artistic and aesthetical narrative in itself is quite intrepid and daring when juxtaposed against anything that their closest rivals are doing. Getting lost in a song isn’t just about finding a connection in the hooks – it’s about becoming one with the band’s emotional state. A combination of imagistic lyrics and sumptuous dreamy interludes make such a feat very attainable for those who listen to The Chordaes.

“California” is by far one of the most articulate and poignant pop singles I’ve heard in sometime. If I didn’t know any better, you could have told me that it had been composed by more seasoned musicians, which only makes me eager to see what else this unit can come up with in the future. With so much talent at their immediate disposal and enough momentum to kick start their rise to national prominence, I don’t think this will be the last that any of us hear from The Chordaes. In fact we hear there is a new EP in the works.