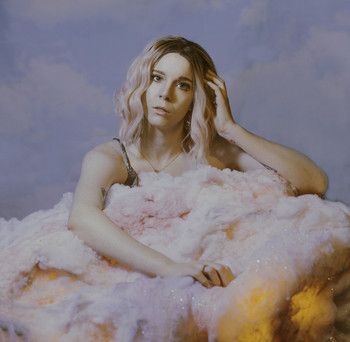 This song is lyrically and sonically the lightest song on the album, and even though it’s upbeat and fun, it was almost painful write. My other songs deal with difficult feelings, but when you’ve been in a dark time for a while, one of the most vulnerable things you can feel is hope. And when you haven’t felt hope in a long time, it can be so beautiful and scary that it hurts. I actually cried when I heard it the first time. I turned to my producer and said ‘this is what my heart sounds like.’

Writing this song was my way of capturing the feeling of opening myself up to love again. It’s not a love song, it’s a battle cry for the heartbroken that aren’t ready to give up. It’s the hopeless romantic’s acceptance that “maybe it’s not going to work out, but the risk could be worth it.” It’s the feeling right before the fall – terrifying, but exhilarating.

Athena is the brainchild of singer-songwriter and fine artist Hilary Tomlinson. Born in Tulsa, OK, Tomlinson grew up a shy creative kid with a penchant for melodrama and performing. “I never really stopped playing pretend,” she adds.

Athena’s music – both sinister and delicately magnificent – deftly straddles the line between light and dark. Her sticky electro pop sensibilities call to mind Halsey or Lorde, but her flirtations with the macabre and emotional exploration are akin to Imogen Heap and Zola Jesus.