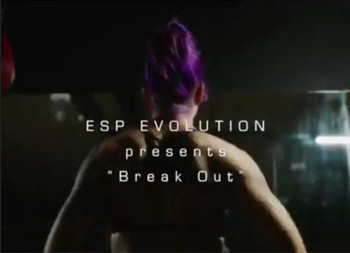 ESP EVOLUTION has released a brand new heater of a song entitled ‘Break Out’. This duo consisting of music producer and guitarist Overdose and singer and songwriter The Lady Capri, will be once again heating up the airwaves with their new song ‘Break Out’. It’s a refreshing unique song with a killer beat, killer vocals and guitar solo that will knock you on your ass in awe. Together this duo has created a track that is sure to be added to music playlists all over the world.

“We chose ‘Break Out’ as our latest release because it’s strong, it’s fun, it’s interesting and it once again introduces us as the musical force that we are.” – Overdose & The Lady Capri

About the Artist: Overdose and The Lady Capri, have come together with the sole mission of saving the world from the monotony of manufactured sound! ESP EVOLUTION creates music that will evolve your musical taste buds and make you groove outside the box. Overdose, who has produced for artists such as Tank, Aaliyah, E40, and Fat Joe among others, formed ESP EVOLUTION with The Lady Capri in 2010. Overdose and The Lady Capri now create music together with the sole mission of uniting people through music. Inspired by the phrase the “Mitakuye Oyasin”, which is sacred among the Native American Lakota people and translates to “we are all related”, ESP EVOLUTION brings an eclectic hit filled infusion of pop, rock, hip hop, r&b and some reggae to the world. ESP Evolution has had the pleasure of playing many of LA’s top venues like Whisky a Go Go, House of Blues Sunset, House of Blues Anaheim, Molly Malone’s and a host of others.