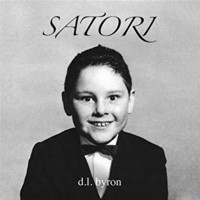 This is one I’m particularly excited to review after I read D.L. Byron’s backstory and how he has quite the musical past! Byron was signed by Clive Davis the year I was born in 1979 to Arista Records and had his debut album produced by Jimmy Iovine, which churned a Top 40 Hit single and popular MTV video, “Listen to the Heartbeat”. D.L. toured with Bob Seger and the Boomtown Rats and even had Billy Joel singing backing vocals on his cover of “Down in the Boondocks”. Next is one of his greatest creations, in my opinion, “Shadows of the Night”, and this is where Arista said this single wasn’t “commercial enough”. Fittingly enough, the rest is history because the track still went on to be a HUGE success thanks to Pat Benator’s rendition becoming a global sensation & Grammy winner and the song also went 5X Platinum in Germany with Helen Schneider’s version.

So, not a bad start one would say and as great of a song as “Shadows of the Night” was and still is to this day, that was then and Satori is now! This four-track EP is an escape from the restrictions of being under a constant microscope as D.L. Byron is able to roam free to explore all avenues and be the King of his Craft. These recordings were released under Zen Archer Records where Byron can have full control of his music and since the late 90s, D.L. has made eight albums under his Independent label. The artistry and love that went into this project can be heard loud & clear as D.L. Byron poured everything he had into Satori. First up is “No 1 God” that shows off Byron’s high register and also offers driving rhythms from the guitar & drums. The listener will get unique vocal dynamics here with a real nice tone from D.L. Byron’s voice. The tune truly moves and gets you pumped up. Next, we have “Rehearsing For The Future” that is energetic and contains a catchy hook & beat while the next track, “All Fall Down”, is infectious with a Tom Petty influence where you’ll just want to clap & sing along. “Everywhere I Go” delivers a feel-good sound and fun atmosphere that instantly draws you in and attracts the listener.

D.L. Byron is no longer a mere Shadow to a Major Label and only answers to himself when it comes to what works and what sounds right these days. It’s all about THE music at the end of day and really all that matters; the rest is just filler and meaningless crap. Satori is a Zen Buddhist word meaning “Sudden Awakening” and I can honestly say D.L. has stirred up plenty of emotions and connected with many souls on this EP. On that note, I’d like to leave you with some words of wisdom by D.L. Byron himself: “From the start of my career, my goal as a songwriter has been to write songs that are substantial. These days, the Pop bar has become so low that it feels like it’s even more important to share ideas that are thought-provoking, inspiring people to think about their lives and the world around them while touching their hearts in a deep way. It’s a gift I still feel compelled to share. It’s not about personal glory or being in the spotlight but simple communication, which on a basic emotional level is the purpose of all art. If it’s not touching people, what is its value? The songs on Satori took a lot of work, but my goal is always to make each record better than the last one. It is a true labor love.”