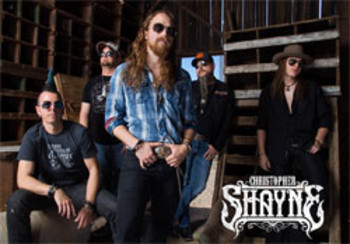 When divulging into a new sonic voyage, most artists are told to pick a lane and stick to it. Arizona byproduct Christopher Shayne wanted to take a different route when deciding to embark on a sonic journey of his own. Shayne’s rebellious and outlaw-like nature shines through in his latest single “Burn Me Down”

Christopher Shayne is no stranger to the desperado way of life. He’s always stuck true to the ideology of doing what you want, whenever you want, wherever you want, while sticking it to the man. As the former driving force behind Phoenix based band Whiskey Six, Shayne was able to seamlessly perfect his songwriting and guide the band to embrace their unique take on southwestern rock music. After a successful run with Whiskey Six, Shayne had a desire to create something new, and construct his desired blend of classic southern and blues influenced rock, complete with modern tones and contemporary twists. Wanting to stay true to his band, Christopher Shayne composed a 12-track record with former Whiskey Six lead guitar-slinger Dave Lansing entitled Turning Stones.

Shayne’s latest rocker is “Burn Me Down,” an explosive toe-curler that encapsulates everything he’s about. “Burn Me Down” tells the story of the general dissatisfaction with growing up and the harsh reality of how the world really is. No matter your social status, you will always face this hard and cold truth at some point of your life, need to be ready to do battle, and happily step down onto the elbow thrashing level of reality. He goes a step further to call out the music industry and share his personal story of what artists and musicians go through daily to fight their good fight. Shayne has never been afraid of pushing the envelope, in fact, he literally shreds it.