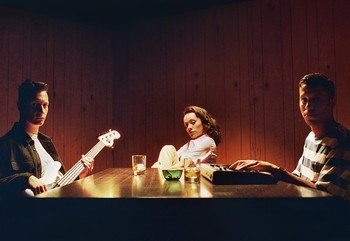 London-based transatlantic trio Radiant Children view classic soul and hip-hop through a retro-futurist lens. Founded in the winter of 2016, Radiant Children are Tyler (AKA producer Lophiile), multi-instrumentalist Marco and vocalist Fabienne. Finding themselves disenchanted with the LA session circuit and major label projects gone awry, the band was formed as a remedy to formulaic writing sessions for the pop machine. “After years working for other artists, we finally felt freedom when it was just us in the room,” recounts Marco of their earliest sessions. With taste in classic hip-hop, electric blues and soul in common, the trio build on the references of their influences with a contemporary sensibility – their sound is a combination of subtle old school references, classic rhythms and modern storytelling.

‘Life’s A Bitch’ is the first single to be taken from Radiant Children’s debut four track TRYIN’ EP due to be independently released in the summer. The video, directed by Matthew Castellanos (Steve Lacy, Tyler, the Creator) finds Fabienne and the band in a plot to break out their gifted friend from a locked-down government facility. The first in a series of stories from the band, the video closes on a sneak peek of their forthcoming second single ‘Poke Bowl’.