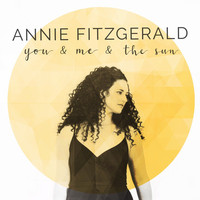 At first listen to Annie Fitzgerald’s You & Me & the Sun, the first question that comes to mind is,’10,000 Maniacs, where have you been all these years?’ This is because Fitzgerald has a bit of Natalie Merchant in the way she sings these ten songs. Or maybe it’s because album opener, “Be Like a Tree,” has a rhythm eerily similar to something 10,000 Maniacs might have tracked, back when they were still a chart item.

However, Fitzgerald is a little more like a female Tom Petty during “Listen Carefully,” which nearly completely borrows the rhythm section from Mr. Petty’s “Free Fallin’.” This is not to suggest Fitzgerald is overly imitative; it just means her songwriting influences can oftentimes be easy for knowledgeable music fans to spot.

Furthermore, whenever Fitzgerald borrows, she mostly borrows from the very best. (Thankfully, there isn’t even one moment where the band Nickelback comes to mind, and that’s a huge blessing). While folkish-pop is the best generalized descriptor for this ten-song set, there are outliers, as well. “Black & Blue,” for example, is not only bruising lyrically, it’s also a track built around some rather aggressive electric guitar work. Nicely, Fitzgerald’s beatific voice deftly adapts to this music’s distinctively differing tone.

“Feels Like Summer,” which one might expect to be – well — especially sunny, features an overcast mood underpinning Fitzgerald singing about how it “feels like summer.” It’s always fascinating whenever a musician utilizes minor key melodies to subtly contradict words in a song. This opposing sonic viewpoint is defiantly driven home by some slightly dirty, feedbacking electric guitar notes. One begins to think this ain’t all about the summer of love, after all.

With “Goodbye Now,” Fitzgerald switches to a vocal sound verging on blues singing. The song’s groove features blues chords, but the accompanying string section prevents it from sounding anything like authentic blues music. The song’s lyric states, “We’ve come to the end somehow,” which means there’s only one thing in this relationship to do, which is – sadly – say goodbye. “Spellbound” is another album cut that leaves one with a feeling of uneasiness. This feeling is intentional, of course, because being spellbound is a circumstance where one is clearly out of control. Fitzgerald sings it with a dreamy, seemingly brainwashed vocal style.

Adding to the album’s growing sonic variety is one titled “I Won’t Walk Away.” This track begins with a sonic backing which – although slow and quiet – sounds closer to something akin to the electronic genre realm. The song eventually settles into a more familiar midtempo rock piece. Nevertheless, it reveals how Fitzgerald is fearless when it comes to experimenting with sounds that are not always comfortable and predictable.

You & Me & the Sun is an album that proves singer/songwriter albums need be anything but conventional. Producer Danny O’Brien deserves extra kudos for putting Fitzgerald’s lovely singing voice into a few slightly unusual settings, which ultimately prove her voice’s flexibility and range. It also evidences how Fitzgerald is more like 10,000 Maniacs than what is suggested by one lone rhythm track and her vocal tone. Additionally, like 10,000 Maniacs, Fitzgerald takes folk songs into beautifully unexpected places. And because these sounds so good, the listener doesn’t mind taking this mystery journey with Fitzgerald.