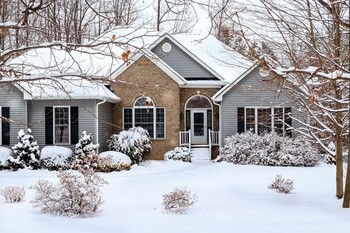 A large part of the country has to endure living in very cold rooms with temperatures dropping well below the freezing point for months. In order to deal with such prolonged periods of extreme cold, it is important for the house owner to devise ways in which the house can be kept warm, but also save money since the efforts need to be sustained over a long period of time. Not taking the right steps in protecting the house from cold temperatures could have severe effects on its residents such as hypothermia and pneumonia. Here are some smart and cost-efficient ways to ensure a warmer house in the winter season.

Being extra careful with the wood-burning fireplaces

Lighting a fireplace can be awfully inefficient for the whole house, if not done properly. It is warm and cozy for someone sitting right in front of the roaring flames. However, when all the heat gets exhausted and goes through the chimney from the fireplace, cold air gets pulled into the house from all areas of the house that are uncovered. This happens due to the ‘stack effect’, a physics-based concept.

Hence it is best to get the most heat out of the fireplace at once. In order to do so,

In order to get the best advice on cutting the best wood logs, it is advisable to visit websites such as Bestsplittingaxe.Net where there are several expert guides on how to maintain steady supply of firewood throughout winter.

During Daytime – Let the Sunlight In

During daytime, as soon as the sun is up, homeowners who live in cold areas should see it as free heat and try to capture as much of it as possible. Even in the coldest areas, on the coldest of days, there is some degree of availability of sunlight which can considerably warm up the room. Hence, before leaving the house in the morning, it is advisable to open up the windows and curtains and let the room soak in the heat as much as possible. If there are certain areas of the house that are not exposed to the sunlight, it is best to avoid worrying about those places and focus on warming up the areas of the house that do get the sunlight.

During Night time – Don’t let the Cold creep in

Once the sun has set, the homeowners must ensure that all the heat that their rooms have soaked in is preserved and not allowed to leave through the windows. It can be done simply by closing the drapes and shutting the windows. In case the home is situated in a very cold region, the homeowner should think about investing in some insulated draperies for winter use. These drapes are made of protective materials and they prevent the natural warmth in a room from escaping out.

One might even put up impermanent curtains over doors that lead outside, just for the night. These are some of the smartest and cost-effective ways of keeping a house warm during winters.