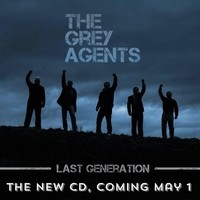 Classified Misinformation, The Grey Agents’ debut effort, garnered considerable acclaim upon its release, but their sophomore release Last Generation consolidates the promise of that initial recording and expands on its musical possibilities. The West Virginia based five piece continues to embrace songwriting influences like REM and Elvis Costello, wiry adult oriented rock with a decidedly intelligent edge, while managing to diversify their sound thanks to addition of saxophonist/vocalist Phil Wyatt. Last Generation is an ideal illustration of how a talented band reshapes its musical vision without venturing far from their core sound. It’s close to an eternal truth that, ultimately, there are two types of bands – those serving as glorified vehicles for either a single songwriter or partnership and those that perform, compose, and record as an organic unit thriving thanks to constant creative synergy. The Grey Agents fall into the latter category and Last Generation is a potent reminder of what such collaborations are capable of.

We are off to the races with their first song “She’s Everything to Me” and the near scream of Cottrill’s voice will convince you of the song’s sentiment if nothing else does. It’s a whip tight arrangement, as well, propelled by the guitar, sax, and Bob Workman’s drums, but Davin Seamon’s piano and keyboard playing fires away to great effect as well. The album’s second tune “The Underdog” has another inspired arrangement with fluid transitions, particularly into a rousing chorus capable of capturing your attention about this cut if nothing else does or can. Cottrill sings this one as once and gives newcomers to The Grey Agents an initial grounding in the different moods he can conjure with his voice. Phil Wyatt’s first singing performance comes with “This Train” and it’s a real winner. The song feels like it’s inspired, to an extent, by the great Curtis Mayfield’s “People Get Ready”, but writers Cotrill, Seamon, and Workman are never slavish about recycling past imagery and give this tune its own distinctive flavor.

John Farmer’s “Vicious” is one of the darker moments on the album, a tune about an increasingly toxic dysfunctional relationship, and his vocal gets under the skin of the song without ever sounding too theatrical. One of the best musical and vocal experiences on the release comes with the rustic sounding “What a Great Day” and the band provides listeners with their most complete band performance to this point while bringing instrumental voices into the mix that we hear nowhere else on Last Generation. Wyatt interprets another song with great results with “Nothing But a Blinding Light” and his saxophone lines are an invaluable contribution to this track that deepens its blue and slightly foreboding mood. They wrap the album with a paean of sorts to the country’s sitting President with the ditty “President Liar”. It’s a tune certain to date with time, but it definitely reflects the mood of the moment for many and makes for a raucous end to a restless, musically energetic album. The Grey Agents are undoubtedly off to a new beginning with Last Generation and it will be interesting to see where the road takes them from here.