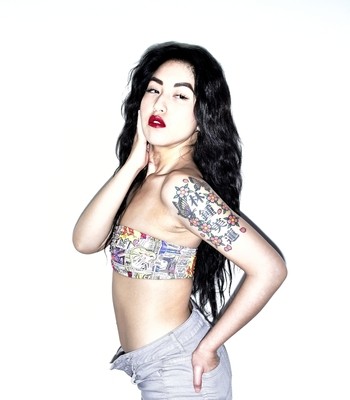 The half Puerto Rican / Chinese artist hailing from the boogie down Bronx is on a journey to take over the music world. Selina Kaia is not only a beauty but also carries a powerful voice in that small body of hers. From a young girl music has always been her passion. Yet like most successful artists she at first found it hard to flush out a whole song but only bits and pieces of poems.

She would eventually overcome the writers block and breakout with her own style of music. Over the years of digesting different artists her inspirations are vast and wide. She has looked up to acts like Madonna & Aaliyah, Janet Jackson, Mariah Carey, Jennifer Lopez, Christina Aguilera, Prince and more. Her music seems to gleam over elements from each of these powerhouses.

“Music saved me. I felt so hopeless in my life. Long story short. Had an epiphany. Put everything into teaching myself. Understanding myself. Once one song was written. It was a done deal! The songs started coming one after the other. & that’s how the passion for music got deeper than skin deep.”

Her music reminds me of a Mariah Carey/ Katy Perry style. Even though Selina feels that my perspective will change as her style begins to blossom. Her first music video was for the track “Tragedy” which actually was a cover song from the artist Always Never. It received over 1,000 views so far which she hopes will grow. It is seductive track with nuances of R&B and blues. The artist Always Never are a Toronto based group that Selina would hope to a collaboration with in the near future.

Selina’s talent did not go unnoticed as she had her first interview at YAC Radio along with artist/rapper Paul Kastalano from N.O.F (Nothin Ova Family). The station premiered her video “Tragedy” on their website which helped promote it. They also played her song “She’s Taken” Ft Kitana White & BayMusic’s FWU.

As we mentioned she has not gone unnoticed she had her first video release party at the famous club VNYL in Manhattan recently. There she debuted her new single “Everyday”. The packed club got a glimpse at the sultry video that leaves you wanting more of Selina Kaia.

“I think it was a success. Got to see some good friends & meet new people to celebrate. Big Thanks to my friend JT from JT Talent Enterprises & Ryan from Success With Teamwork for putting everything together.”

Selina is working on bigger things as she is gearing up for either an EP or an album. The tentative working title of the project is “Toxic.Love.Tragedy”. She has the look and the voice to fit into the crazy world of mainstream music. Keep your eyes and ears out for this talented artist due to raise some eyebrows.