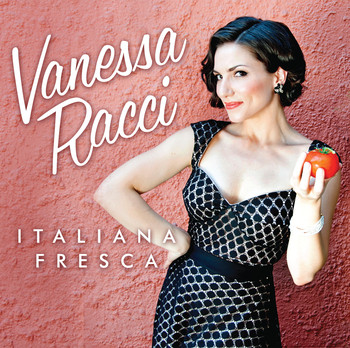 The old timers would have been proud of this talented lady who belts out their hits that are forever timeless. What we mean by old timers are the artists who crooned the crowds back in the 50’s and 60’s. Singers like Frank Sinatra, Jerry Vale, Dean Martin and Al Martino. The young lady, Vanessa Racci could make anyone sing along to these hits that she has rejuvenated with her own spicy recipe.

Vanessa has studied music since the age of 12 and has performed in musical theater for over 10 years. She continues to this day to take vocal coaching and recently began studying musicianship to be a jazz vocalist. When she was young she developed an appreciation for such legends like Connie Francis, Dean Martin, Lou Monte, Al Martino, and Louis Prima to name a few. She learned about them from her grandfather who played their records in the basement apartment of her home.

Her voice is soothing yet oozes with the same Neapolitan flavor the artists she honors in her music. Vanessa has not only sung with a band but also on stage playing the character Christine in Phantom of Opera production. Her performance earned her the Helen Hayes Award. One of many we are sure she will covet.

“Everyone and their mother records standards and I wanted to do something unique. I was driving home from my grandfather’s funeral singing the song Al Di La, that we used to sing together, and it just hit me; no one has re-invented these classics in a meaningful way for new generations of Italian Americans. I guess it was my way of keeping my grandfather’s memory alive.”

She recently released her debut album “Italiana Fresca” which delves into the classic hits she grew up hearing. The album fuses a jazzy feel sprinkled with modern hooks that make it seem appropriate for our time. She offers us favorites like “Al Di La”, “Buona Sera”, “C’e La Luna”, “Return to Me” and more. It is a rebirth of these hits with a jazz infused energy that only Vanessa can deliver. Yet she did not do it all alone she had the talented assistance of arranger Yaron Gershovsky (Musical Director for The Manhattan Transfer) and elite pianist Glafkos Kontemeniotis.

“It was an equally amazing, intimidating and frustrating process working with Yaron and Glafkos. After internalizing the lyrics, I expressed my arrangement vision to them, singing the rhythm and the instrumental vibe. I even beat boxed and recorded horn parts on garage band. It’s so funny that even when you sing something it can be heard and interpreted in many different ways. So we had to go back and forth quite a bit until I felt they were expressing the true vision of the song. And when I heard it, I just knew it was right and it was amazing.”

One of her favorite songs to sing is “Guaglione” since it has a strong female empowerment message. For the release party of the album she held it at the famous “Birdland” which ended up a sold out show. She has performed at many venues but one does stand out for her which was in Washington, DC at the NIAF 42nd Anniversary Gala. So far the album “Italiana Fresca” has reached #65 on the Jazz Charts and requests for bookings have risen since the release. Some of her upcoming 2018 public

Shows include July 14th at the Buffalo Italian Heritage Festival, September 15th at the Syracuse Festa Italiana and September 30th at the Little Italy Street Festival in CA. Vanessa is a refreshing break from the mundane and offers many an opportunity to go back to a time where lyrics and vocals meant something. To keep with her shows and new music visit www.vanessaracci.com or like vanessaracci on Facebook, Instagram or YouTube. You can also find her music at stores like iTunes, CD Baby or Amazon.