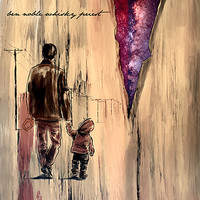 This album is soft and calming. It is the sort of music that you would listen to when you are sad and in need of some cheering up. This effect is created through the acoustics and the vocal techniques. Ben Nobel uses a lot of fluctuating sounds as well as sound tones. The album has a warmth and pleasantness about it. This sound is very much uplifting and calming. This effect is created by the combination of the acoustics and the vocals.

The first song on the album is titled Birthmark; it is a soft song that starts with only the acoustic guitar and vocals. The first line of the song is strong it is, “bullet holes inside my body.” It creates a vivid image. Because of the softness of the guitar the words are emphasized and so is the image that the words create. The next song is Healer Might it features multiple singers. The song is only composed of vocals, in acapella style. Daughter is the next song on the list. It starts with only an acoustic guitar and continues with added vocal as well as the same softness throughout the song. Next is Cutting Teeth it is a song in reference to a child. Little One is a soft love song from parent to child.

Worldspin is the next song with the great line, “The way the angels fell.” There is a lot a lot going on instrumentally in this piece; however it is still sticking with the same softness. The song also has pauses throughout to emphasize the vocals. The Sea and the Moon is a sweet and gentle love song. Madness is next, it’s a love song. It has a faster pace and also starts with a guitar. Still Waters is fourth to last on the album; this piece is only acoustic guitar. It sounds cleverly like water. Morning is a song about waiting. Secondhand Savior is second to last; it is full of wonderful lines like, “Writing until the ink runs out. These definite imagines make for a better song. Ikon finishes up the album with consistency and a love song.

The cover that accompanies the song is also very soft; it suits the sound of the album. Featured in the photo is what appears to be a pair of drawn figures of a father and son. Then the rest of the photo is colored in a watercolor style. There is a line of receding telephone poles in the background. They are featured to give the viewer the impression that these figures are taking a walk outside. Towards the top right of the picture there is what appears to be a tear in the background. The tear reveals a purple galaxy mixed with pink and a lot of stars. This small fissure reflects hope and possibilities which is also reflected by the father and son duo.

The cover that corresponds with the album reflects this feeling of calm that the music gives off in a great way. It also features the parent and child that is referenced in the album. The pieces have a warmness which is similar to the feeling of hope. It really is great also for cheering up anyone who is feeling a bit down.