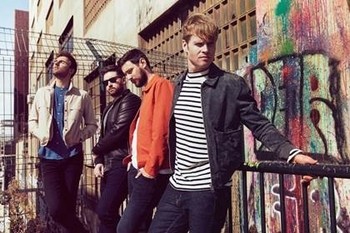 Ireland’s breakthrough, UK platinum-selling band, Kodaline release their new single “Follow Your Fire” today at all digital providers. The pop leaning track was produced by hitmakers Steve Mac and long-time collaborator Johnny McDaid who both worked on the worldwide smashes “Shape Of You” by Ed Sheeran and P!NK’s “What About Us.”

“Follow Your Fire” will be featured on their forthcoming new album that is due out this summer.

“It’s been a while since we released our second album,” says lead vocalist Steve Garrigan. “But we felt we need to take the time to make sure this was the best album we could make! We are so happy with it and can’t wait for people to hear it!”

“I’ve watched the guys open to new paths towards an exciting and impressive record,” says McDaid. “I think the result of the last few years of writing has delivered some amazing moments that will find their way into ears and hearts everywhere. I’m proud of how far they’ve come and I look forward to where they can go.”