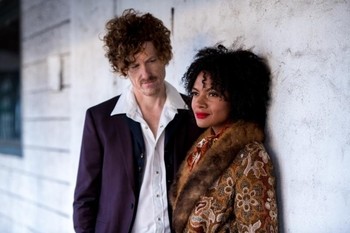 Today, Birds of Chicago announce May 4th as the release date for their upcoming album Love in Wartime on Signature Sounds, and share the first track “Roll Away”. Led by JT Nero and Allison Russell, Birds of Chicago are known for their seamless combination of rock n roll meets “near perfect Americana” (No Depression). Nero and Russell recently recorded Love in Wartime, an album envisioned as a cinematic rock n roll suite, with producer Luther Dickinson (North Mississippi Allstars)at Steve Albini’s Electrical Audio Studio in Chicago.

The first single “Roll Away” was written as a shot in the arm for the heartsick, hibernating or otherwise embittered, and invokes the rites of spring with the very real sense that there’s no time to lose. “The mission is simple: get people to a dance floor and get some love lights switched on,” says Russell. The song’s message is even simpler: it’s never too late. “Roll Away” embodies what critics loved about Birds of Chicago’s 2016 album Real Midnight, produced with Joe Henry- joyously urgent rock songs with deep lyricism, gut-punch singing and fevered musicality.