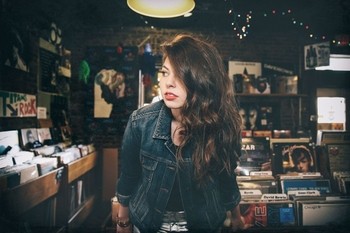 Indie singer-songwriter Merritt Gibson is set to release her debut album, Eyes On Us, on March 30, 2018. Recorded in July 2016 with Grammy Award-winning producer/engineer Mitch Dane at his Sputnik Sound studio in Nashville, the forthcoming album is full of songs that truly mean something, be it advice to other young women, reflections on youth and love, defiance of the status quo, or a deeper understanding of the self. From a wide range of inspiration and sources, Gibson creates a holistic view of what it means to be a young woman today. She states: “My songs are the synthesis of my life and the lives I observe and imagine.” Gibson crafts songs with a seamless musical and lyrical balance of both mystery and familiarity, of grand emotion and real life.

Take, for instance, the track “I Heard,” which Gibson wrote as a form of catharsis when she got some difficult-to-digest news. “I started this song the same day I found out my ex-boyfriend was in a new relationship,” she recalls. “I had just gotten out of sports practice and was sitting in the locker room when I saw a post on Instagram of the two of them. It had only been about two weeks since we had broken up. I wasn’t upset because I missed him — it was my decision to end things — but I was angry that he could move on so quickly. I think there’s a selfish part in all of us that wants an ex to struggle after a breakup. So finding out that I was so quickly replaced really got to me. And on top of all that, his new girlfriend was pretty much the opposite of me. So that made me question whether I’d actually known him and his values. I went straight to my piano to begin ‘I Heard.’

“Out of all the songs I’ve written, this one may have come the most naturally. It was like the lyrics and melody already existed, and I was just transcribing them. I think that’s because I wrote the song in the absolute heat of the moment instead of waiting even a couple of days. It was now and it was real and it was raw. Writing ‘I Heard’ gave me a sense of closure and release. I was able to work through my layers of emotion — anger, frustration, confusion, even betrayal — to understand exactly what was bothering me. While I wrote the song, I knew my feelings weren’t logical. My ex didn’t owe me anything; it was over. But I never denied myself the feelings. I believe that all emotions are valid, but that doesn’t mean you should necessarily act on them. That’s why songwriting is such a great outlet — instead of unfairly confronting someone, you can get the same emotions out while making art.”