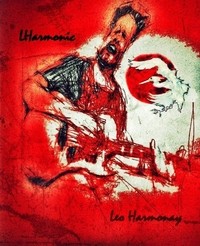 Leo Harmonay lives in two distinctly different worlds. His daylight gig as a New York City high rise apartment building manager seamlessly transforms into a nighttime gig as a folk singer and songwriter of growing repute. His third studio release LHarmonic finds this talented writer, never restricted to one form alone, reaching a new peak in his recording career with a collection illustrating his longstanding strengths more refined and focused than ever before with an ideal musical build structuring each of its compositions. The Hudson Valley headquartered performer and writer isn’t a strict folky, however, and incorporates blues and jazz influences into his writing that’s quite different from your standard singer/songwriter fare. LHarmonic’s seven songs, including a live bonus track, do not just constitute a quality EP – this is one of the year’s most thoughtful releases yet in this young year and will likely end 2018 rated on a similar note.

There’s some tasty electric guitar driven country licks slipped into the acoustic jangle of EP opener “Shine On You” and that classic Nashville flavor comes off like affectionate, light-pedaled honkytonk. The understated percussion nicely punctuates Harmonay’s sensitive vocals and the lyrical content isn’t particularly involved, but achieves a surprising level of conversational eloquence thanks to Harmonay’s phrasing. There’s some nice harmony vocals appearing on the first song that appear during the second, “Deep Ocean Blue”, as well, but the country influences in the earlier tune disappear in favor of a straighter singer/songwriter work with some lyrical flourishes of electric guitar. There’s a strong hint of James Taylor in some of what Harmonay does, but you can’t ever accuse him of imitation because these songs have the stamp of the personal making each one of them stand out. The commercial aspects marking each of the first two numbers disappears entirely with the third song “Heart Alone”. This is a tune that achieves its effects much more through accumulation than immediately revealing itself and the pensive mood is a notable shift from the EP’s opening tandem.

The EP’s best lyric comes with “Glorious Decline” and its melancholy sarcasm gives its an unique personality for what, otherwise, might be heard as a straight forward folk tune. It’s the EP’s longest number, up to this point, and its most spartan thanks to an arrangement centered on nothing but Harmonay’s voice, guitar, and some ghostly backing vocals lightly accentuating Harmonay’s lead. There’s a lightly psychedeliczed, dream-like mood to the song “Rainbow Sounds” fleshed out by wisps of electronica adding color to the guitar track. The final studio cut on the release, a reprise of “Shine On You”, shares many similarities with the first track, but it’s more extended and the added instrumental touches are very effective. It ends the EP in a very logical fashion and the last overall number, a live version of the EP’s second song “Deep Ocean Blue”, is just as effective in a strictly acoustic setting as it is with electric strokes coloring the studio recording. LHarmonic is a rewarding listen from the first listen and never presents one face alone to its audience. Instead, there’s ample variety here to satisfy casual and hardcore listeners alike.