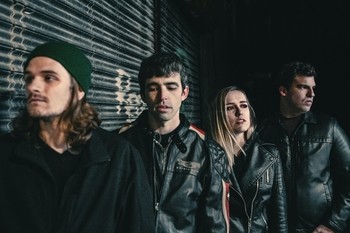 Boston pop punk band Wave Break are back with their second single “Plaster City,” an anthemic track written by lead vocalist Kelly Barber, out NOW. Highly reminiscent of Riot!-era Paramore, Wave Break blends early 2000’s pop punk elements with alternative cues to take on an energetic persona. Although just their second single and having only played shows in the Boston area thus far, the project was developed from Barber’s long-term past solo career, placing the band on an experienced playing ground. “Deadlock,” their debut track, officially put Wave Break on the map after having done underground work since Spring 2017. “Plaster City” is sure to get more eyes and ears on the band, having already been added into medium rotation on idobi Radio. Although no official release timeline has been announced, Wave Break has hinted at the release of an upcoming Spring EP. About “Plaster City,” the band states:

“Plaster City is an upbeat anthem about standing up to those who try to tear you down. It’s a metaphor for a state of mind that’s incredibly difficult, if at all possible, to get out of. This song is by far the most aggressive one on our upcoming EP.”

Wave Break, a metaphorical term meaning to overcome adversity, is an apt name for the newly-formed Boston-based band. Founded in April 2017 by lead singer/rhythm guitarist Kelly Barber and drummer Mike Kolvek, their lyrics centralize on the theme of standing up to societal or social barriers. With the help of lead guitarist Alex Orav and bassist David Sachs, the band blends elements of post-hardcore, pop punk and emo rock for a sound that’s all their own. Their debut single “Deadlock” was released in October, followed by a feature on The Undiscovered Sound on idobi Radio and a show slot opening for Oh, Weatherly (Hopeless Records) and Centerfolds (CI Records). Their second single “Plaster City,” an anthem about standing up for yourself against those who try to tear you down, will release on February 16th and be added to regular rotation on idobi Radio.