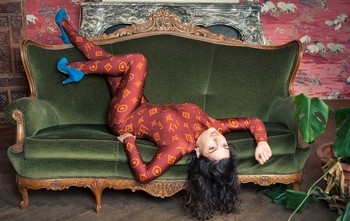 Nele Needs A Holiday releases the first single, We’ll See from her album, Love Yeah, a track which perfectly demonstrates her achingly emotive vocals and utterly immersive song-writing talent. Nele (pronounced “Nail-a”) writes songs about the tragedies of everyday life – capsules of time where it feels like the world is collapsing around you but are forgotten soon after – love songs which feature arguments, fears, doubts, loss and strange encounters and show how people really react in relationships, rather than the pages in a comic book.

We’ll See is accompanied by an inspired video which revels in the paradoxes and dark humour of Nele’s music. Committed to playing her music live, Nele has assembled a seven-strong all-female touring band with matching stage outfits, entirely keeping with the visual style of her songs – indeed, her intention is to create a music video for each song on the album. Her music is part Bette Midler theatrical showtune and part profound torch-song, but with an overriding Adam Green-esque eyebrow raised at the absurdity of life.