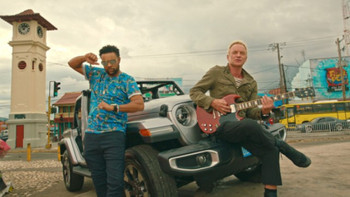 Filmed in Kingston, Jamaica, the new video was directed by Gil Green (Nicki Minaj, Drake, John Legend) and celebrates the duo’s mutual love of Jamaica – its music, the spirit of its people and the vibrancy of its culture.

Following their broadcast debut performance of “Don’t Make Me Wait” on the Grammys live from New York City’s Madison Square Garden, Sting & Shaggy also performed their new single at the NFL’s Superbowl Tailgate event that aired on NBC this past Sunday.

“Don’t Make Me Wait” – the new, Caribbean-flavored song from Sting and Shaggy – was released on January 25th and will be followed by a collaborative, island-influenced album, entitled 44/876, on April 20th.