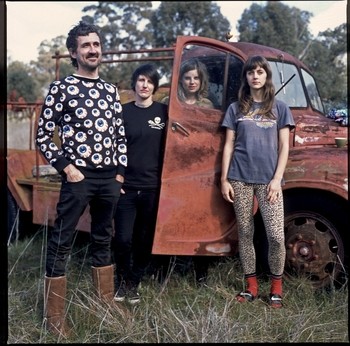 Tropical Fuck Storm (TFS for short) is a newborn band formed by Gareth Liddiard and Fiona Kitschin (The Drones). Liddiard and Kitschin are joined by maniacs Lauren Hammel (High Tension) on drums and Erica Dunn (Harmony, Palm Springs) on guitars, keys and other gadgets. Not since John Lydon changed it up from the Sex Pistols to PiL has a curveball felt so bracingly exhilarating.

Swaggering in with two of the most ominous opening lines of recent times…”Hey hold your fire man don’t shoot / Here comes the umpa lumpa with the nukes”, ‘Soft Power’ is a breakup song. The accusers, The People of Earth, are finally kicking their abusive ex-lover (the USA) to the curb: “Everyone here gets the joke / Everybody except you”.

Tropical Fu*k Storm ride in to articulate with devastating accuracy the collective dread and repugnance of this moment in history.

Brilliantly paired with B-side ‘Lose The Baby’, a cover of the iconic Lost Animal classic penned by Jarrod Quarrell, the new single by Tropical Fu*k Storm is a collectible insta-classic and a glimpse at the band’s forthcoming debut album, that is being recorded with Aaron Cupples this month, and due 2018.