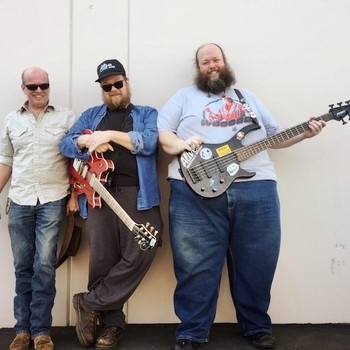 Mark “Porkchop” Holder originally turned the blues on its head more than a decade ago as a founding member of punk/blues band Black Diamond Heavies. While he’s been tearing up juke joints, festivals and dive bars since then with his own fiery brand of the blues, it wasn’t until earlier this year that the Tennessee musician released his own debut solo album, Let It Slide, an acclaimed effort that No Depression described as, “…fire in a barrel. If the Rolling Stones camped with Howlin’ Wolf and Billy Gibbons on trucker speed for the weekend with a fuzz pedal, this would be its precious procreation.”

Now just nine months later, the guitar-slinging, harp-shredding bluesman is releasing his follow-up album, Death and the Blues. On it, Holder, along with Travis Kilgore (bass) and Doug Bales (drums), builds on the success of his previous album with eight newly penned tracks, along with three rousing covers (a stripped-down acoustic Delta-blues re-rendition of Don Nix’s “Nobody Wants To Cry,” Jr Kimbrough’s “Sad and Lonely Nights” and the traditional song “Billy the Kid,” originally recorded by Marty Robbins).

Despite the fact that this was recorded in the same studio as their last album (Tiny Buzz in Chattanooga, TN) and by the same line-up, the results are much heavier and tighter on this affair, with Holder’s inventive slide guitar-work snarling and baring teeth over the rock-solid rhythms from Kilgore and Bales. “The philosophy of recording this album,” Holder explains, “was to document the increased live dynamic of a band that has now played a couple of hundred shows together. It’s a power trio record.”

“Blues is the music of poor people, and poor people live closer to death than other people do,” Holder admits. “The message of the title track is simple: death and the blues are real. I have a personal connection with the symbols of death; they remind me not to waste my time. Life is short.”