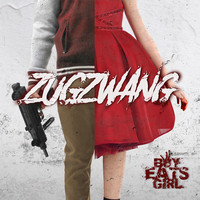 Brutal in its aural assault on the senses, Boy Eats Girl takes an intensely emotionally style with the powerful “Zugszwang”. Downright chaotic the multi-faceted, multi-layered approach work in unison to capture a plethora of doom-laden effects. By far the true heart and soul rests with the vocals, whose dexterity works wonders within the epic expanse. Rhythms have a physicality to them as they move along at a breakneck pace. Guitar work positively bludgeons the listener with something akin to a force of nature, unleashing a furious series of riffs that intermingle to create a unified consistent whole.

After a creepy sample that sets the mood, the thing blasts through with sheer madness. Quite distorting everything transforms into a colossal groove, chugging along with impressive power. Drums neatly weave together into the increasingly loose guitars. Ever so carefully the guitar flirt with completely losing it, as they try to soar into the sky. Percussion gets a very serious workout while the entire piece moves at seemingly impossible speeds. Vocals add to the inherently disturbing nature of the piece, with the lyrics further emphasizing the nightmarish scenario. By choosing such a path the song veers towards the abyss, allowing all to swirl about in a vast field. For the final stretch of the song the percussion drops out letting the guitars scream out into an ominous drone.

On “Zugzwang” Boy Eats Girl chooses a unique path, one that reveals their impressive chops and ability to create an absolute maelstrom of sound.