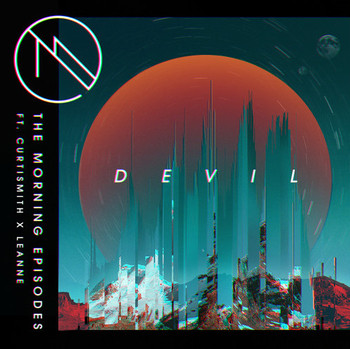 Whenever religion is involved it is either good or bad. In the case of the Devil the demon of all evil according to some if not most, it means bad news. “Devil”, featuring a guest spot from Curtismith and Leanne, is on the other hand a rather interesting track by a pop act called The Morning Episodes.

The track is pop driven throughout, which makes it fall along the lines of a lot of the other pop material thrown out and about as of late. Not saying this act sounds anything like Miley Cyrus’ work or Lady Gaga or Sia’s standards, but more like OneRepublic or some Coldplay stature. That is at least the type of vibe that this particular track gives off the most. The form of the music, is well thought out let alone played out, as it’s beat source gives off a catchier approach to the overall experience, as opposed to the vocal chords which delivers a more fluid form. As if the vocals were set atop a stream, they would glide down it, in a slow but fast paced manner, that it makes the music appear in that sort of way.

Otherwise there is no other way to describe how the music and vocals sound in terms of this track. Not much else to really go off of for this track really but what has been said already. It’s your average pop track with added elements of minor rap that sounds pop, making it more unique yet still catching. Surely to be one song to hear again and again and not be bored with it.

Simply how to put it best. After hearing this track a handful of times for this piece, it began to grow on me, becoming more than just a average or typical pop track. It is more than that, it is a track that can be accepted and enjoyed. It has it’s layering affects that keeps it together. The rhythm sources keeping in check with how everything else like the music, production, lyrics, are well kept and play out as the song rolls along.

Speaking of the production quality and lyrical context, the lyrics and overall meaning of this track as a whole, would be love and relationships, by the looks of it. Having one probably the Devil, wanting something from you, getting it but falling to miss it somewhat, is sort of what is being said within. If not that, then it is just another track that can be heard sounding nice.

The vocals and music do sound well produced, a really well laid out track. As a matter of fact, Miguel Escueta the band’s main man, frontman, songwriter, and vocalist, doing a solo of releases as an artist on his lonesome, went as far as grow and evolved with the different aspects of life and all of that has set up what is done upon “Devil”. It is an all new and refresh of the in sound that just works out for The Morning Episodes material. John Pop produced the track, as it just is that this is the first release in sometime.

Aside from the music side of things, Miguel Escueta is also a serial entrepreneur with businesses, in coffee, food, and nightlife. Also while finishing his schooling in getting his Master’s degree in Entrepreneurship. So there is so much more to it for this man behind The Morning Episodes, than just a track titled “Devil”, that features a few guest spots here and there. It is more than just a track it is meaning to it. All of it, that is how it works.