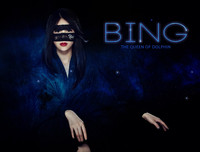 For the past decade performers from Asia have become to influence the music scene internationally. Such artists like Feifei Yang, Princess Long Long and Dong Feng have made an impact in the industry. Many young Asian artists have taken notice and are slowly growing into stars in their own right.

One artist in particular has been building her name and unique style one beat at a time. The artist, BING, is very creative from her signature mask to her music that fuses different genres. Her love of music was clear to her after she won first place in a singing competition when she was 13 years old. This is when she vowed to follow her heart to create music.

Since then she has performed in many parts of China where she wowed crowds with her theatrical shows. Her wardrobe is elaborate and creative aside from her mask an element that has not been utilized since the one glove King of Pop, Michael Jackson. BING’s voice is electric and attractive which compliments her natural beauty. BING was inspired also by the blockbuster talent Beyoncé for than one reason.

“I feel connected to her since she had battled with depression as I have. Beyoncé has managed to control her emotions through her music and I have. My music is full of energy which is similar to her style.”

The mask that she wears that runs below and above her eyes is meant to invoke imaginative thoughts for her fans. It is very creative as it forces the viewer to almost delve into her mysterious eyes and get lost in her music. BING has managed to capture the public with her innovative performances. She was chosen for the Remarkable Singer Award at the Global Chinese Music awards and Annual Pioneer singer award at the Music Pioneer Billboard.

Her popularity grew exponentially when she hit over 110,000,000 views after a performance on China TV. BING had the honor of performing at the 2016 London Fashion Week as the first Chinese artist to do so. While in England they dubbed her the “Queen of The Dolphins” based on her vocals and their similar pitch to Mariah Carey’s.

“All of my current success is due to my hard work and the effort I put into it.”

She hopes to one day perform in the States like other Asian artists as of late. At the moment, she has been busy working on her debut album (no title as of yet). BING is slowly becoming an act that many will follow her path to stardom is not far off in the musical constellation. Be on the look-out for the masked artist BING!