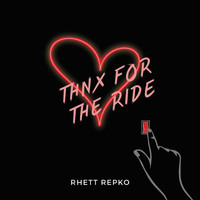 pko makes enjoyable sounds with a mixture of influences to make his song. His lyrics are also a large driving force in what creates Thnx For The Ride. As well as the varying instrumentals that keep the listener engaged in the picture that is being painted by the words. Thnx For The Ride is a song about love that didn’t go exactly as planned. Thnx For The Ride is about a relationship that wasn’t terrible, but it wasn’t meant to last. The sound of the song is electronic with the instrumentals of an electric guitar and drums. The abbreviation of the word thanks is used to match the style of the song, the modern sounds and also it is used to create a layer of interesting even in the title. It makes the reader of the title think that if the title is interesting, the song itself must be gripping.

At the age of 15 Repko took guitar lessons in high school. Then he found the Beatles and Nirvana for inspiration, got his BA in Music and began making music with his band. The next step for him was only to make music. The first picture of Repko on his website is a reflection of his music, soulful. A photo of him singing into a microphone his neck muscles flexed from concentration and his eyes closed. His website also flows into each different page just as his song Thnx For The Ride flows from word to well thought out word.

There are some particular lines of lyrics which stand out, one of which is “She thinks that I’m going crazy, does she know what she’s like lately.” This line not only goes well with the sound for the song so far, it also paints a better picture of the relationship that he was in and why he is leaving her. Her lack of communications skills is also mentioned and his calling her crazy goes hand-in-hand with her inability to communicate. Another one of the lines that stands out and is also repeated to create a great sound is; “I don’t think we’re right I don’t think you’re my type. But I did have fun, so thanks for the ride.” This lyric also encompasses what the song is about; it sums up the song and because it’s repeated the message of the piece comes across clearly to the listeners.

His music, his lyrics, his experiences, each contributes and complement each other to form Thnx For The Ride. The title is as such to create a different level of interesting in something as simple as the name of the song. Repetition goes a long way to make this song enjoyable, but also the sound the lyrics create. The guidance that Nirvana and the Beatles gave Repko also comes through in his music. The softer sounds from The Beatles mixed with the varying instrumental sounds of Nirvana. All of the following elements come together to make music worth listening to.