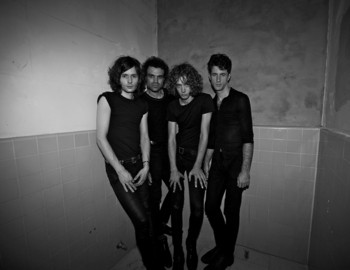 Warbly Jets are an LA quartet that don’t fit comfortably into a scene… they exist into out in the ether, caught somewhere between yesterday and today, where massive rock melodies brush up against skittish breakbeats and laser-guided synth lines. The band’ self-titled debut will release on October 20 and after teasing three singles from the album, now they’ve released the maniacal “Shapeshifter”.

The track was inspired by the Cronenberg science fiction/horror flick Videodrome and is an aggressive anthem equivalent to brushing your teeth with a belt sander.

“We wanted something incredibly aggressive to polarize the songs that were ending up more strings-centric,” says Julien O’Neill (synths/guitar). “I put it all together in a damp, dripping space on Hollywood and Vine and Sam concocted a vicious noise solo on synth that brought it all home.”