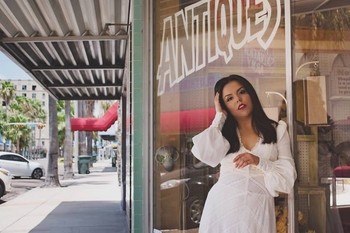 Madelyn Victoria’s music videos have received more than 600,000 views on her Youtube channel. The video for her breakout hit, “He Only Loves Me on the Dance Floor” reached #1 on the Y’allwire Most Watched country music video chart. Her acoustic performance video cover of her idol, George Strait’s “Amarillo By Morning” received over 240,000 views, while her cover of Johnny Cash’s “Folsom Prison Blues” received more than 100,000 views, making Madelyn Victoria one of today’s most viewed young indie country artists.

Now, the Texas singer-songwriter has released a brand new acoustic performance video for a self-penned song, “I Can Be Your Senorita.” The song was inspired by Madelyn’s late Mariachi instructor, and it was filmed at La Villita Historic Grounds in San Antonio, Texas. Beautiful shots of the grounds are mixed with live performance clips of Madelyn, joined by her brother, Albert Vallejo and Matt Gonzalez, on guitars. The clip was filmed, directed and produced by Hector Aleman of HX Films and Madelyn Victoria.

Madelyn Victoria says, “I feel like this song is a perfect brand for me. I wrote “I Can Be Your Señorita” right when I graduated from high school, and I dedicate it to my late Mariachi instructor Mr. Mark Bazaldua. He played a big influence on me and my music and always said if I wrote a Spanish Country song, people would love it. It’s looking like everyone is. You can hear the breeze blowing and birds chirping during the video and the audio take is straight from where we were filming, no studio work- just raw unfiltered sound. I plan to record this song as a duet someday. I’m so excited to finally have it out for everyone to view and listen!”