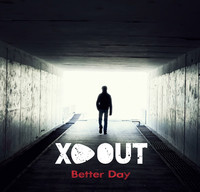 XD Out is a Christian rock band featuring two brothers, Chris and Josh Haynes. The album art features a man walking away from the camera through an underpass. The viewer can only see the outline of him because the shadows in the photo are strong. This type of photo places the focus in this picture mostly on color and this focus works well for a religious centered band cover. The light being God and since the figure is walking towards the light, he is walking towards God.

The first song I’ll Know begins with a blasting guitar, then it really picks up with the addition of drums. The sound begins to quiet when the vocals begin. “I know,” is the repeating line throughout the song. It’s the hook and it works. This song is a great preview of the other songs in the album. Born Again is the second song in the album. It begins with vocals accented by pauses filled with the loud sound of drums. Here with this piece you can start to see the focus of the music starting to center entirely on faith. Next on the list is Break Me, it has another strong introduction with drums and guitar. The vocals in this song has been enhanced in a way to sound faded. The instrumentals at points are almost louder than the vocals.

The later songs begin to focus in on the musician’s message. The piece Everything begins with an echo-y guitar. It’s a song dedicated to God, saying, “you are everything.” Just One Way has another great instrumental introduction. It is a song about saving your eternal life by accepting faith into your heart. The Source is next on the list; it has a similar message to Just One Way. Better Day has an interesting catch line. The line is, “got to break out,” it stands out because typically artists use the title of their song as the catch line. These musicians go against the grain with the song and still it is catchy. Free is a song about how loving God is about freedom. Worthy is next on the list, it is asking God for guidance. The next piece is titled Deeper. It is a statement about how much deeper God can be loved. Second to last on the playlist is the song, We Love You Lord. It discusses what the title says it’s about; the musicians are confessing their love for God, even through adversity. The last song is a remake of Everything, it now has more drums and softer vocals.