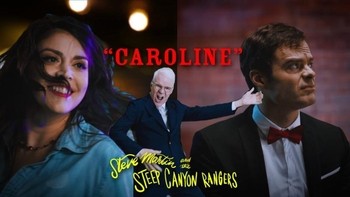 Steve Martin debuted his new music video for “Caroline” today starring Saturday Night Live’s Bill Hader and Cecily Strong. The song is the lead single off “The Long-Awaited Album,” Martin’s newest collaboration with the Grammy-winning North Carolina -based band the Steep Canyon Rangers, due out September 22nd on Rounder Records. In the music video, Bill Hader and Cecily Strong play a couple in the throes of a breakup. Heartbroken after his girlfriend dumps him, the video depicts Bill’s attempts to win Cecily back.

“The Long-Awaited Album,” is a collection of 14 stunning brand-new songs all co-written by Mr. Martin and produced by Grammy-winner Peter Asher (James Taylor, Linda Ronstadt). Highlights include the haunting Americana tune “On the Water,” a blistering bluegrass instrumental entitled “Office Supplies,” and the boisterous and humorous, “Caroline,” which showcases the lively dynamic between Martin and the Rangers. The album also includes a Christmas song with guest appearance by Victor Garber.