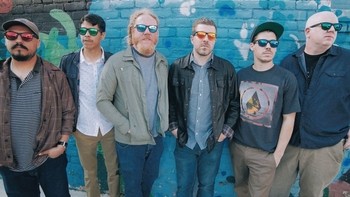 Orange county’s Simpkin Project are proud to announce the release date for their upcoming album Beam of Light. The six-piece band will release their fourth studio album on September 22, 2017 on VP Records’ Dub Rockers imprint. Pre-orders launch on August 11th.

The Simpkin Project plays amulti-faceted blend of reggae, blues, rock, and Americana, steeped in soulful harmonies that varies greatly on its exterior layers, but only atop the organic rhythms of reggae music. Their sound has been described as “uncompromising…blending authentic roots reggae rhythms with a wall-of-sound production style.” The lyrical compositions of frontman Phil Simpkin range “from the simply truthful to the stirringly anthemic.” The SoCal based band has devoted themselves to reggae since they came together in the early aughts. Phil Simpkin and Shawn Taylor, co-lead vocalists, have been with the band since its inception when they opened for Steel Pulse, which somewhat unbelievably served as the band’s first live performance. As they said when they signed with VP Records/Dub Rockers, “We love reggae music period. What other genre of music exists solely as the vehicle that carries with it messages of peace, positive vibes, respect, love, empowerment and spiritualism?”